The Complete Guide to Staking Crypto And Why It's Important

In this article, we dive into staking crypto and how investors are earning passive income. 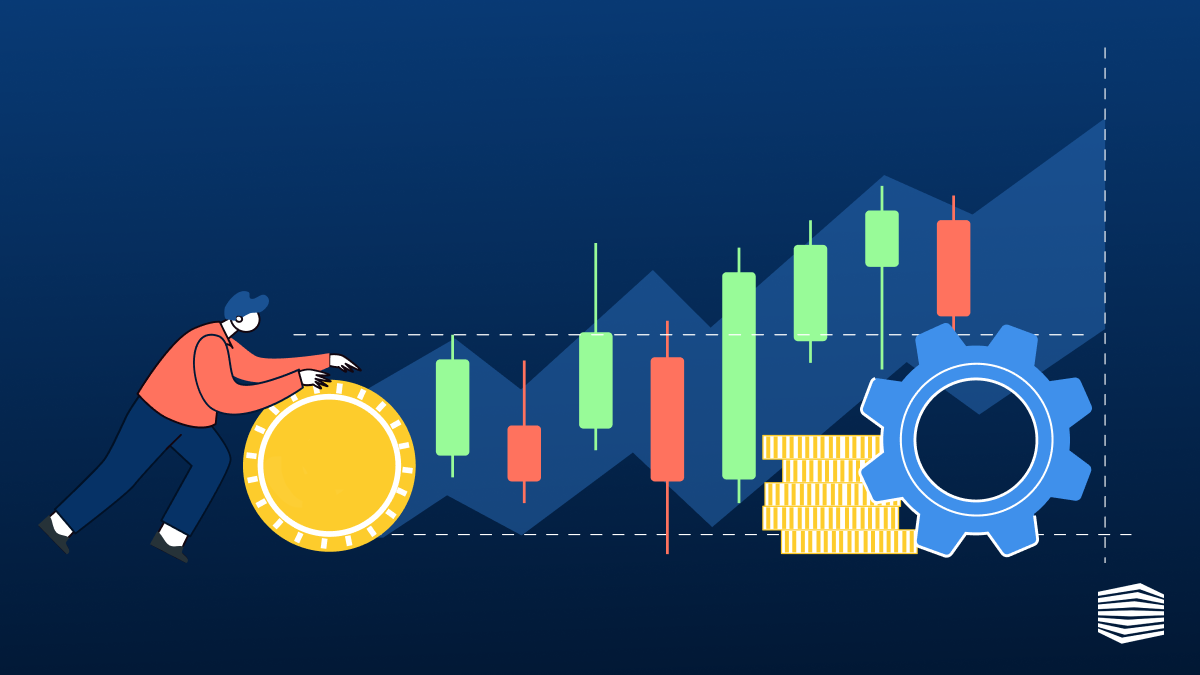 There are multiple avenues for making your financial assets work for you in crypto, and staking is rapidly becoming one of the most popular and trending avenues. This is because some popular cryptocurrencies offer high-interest rates for staking on their network and have become a great way for crypto investors to earn passive income using their already existing digital currencies. Let's dive into the world of staking your digital assets.

What is staking crypto?

It is essential to understand the difference between Proof of Stake (PoS) vs. Proof of Work (PoW) before getting into what staking is.

In Proof of Work systems, "miners" leverage special computing hardware to solve a complex mathematical 'puzzle' to obtain the right to append the next block to the blockchain, for which they earn block rewards and transaction fees of all the transactions included in the respective block. This mechanism is used by Bitcoin (BTC) and the current version of Ethereum (ETH), among others. However, this approach has its downsides, such as high energy consumption, slow finality, and lower transaction throughput.

In a PoS network, like in a traditional PoW (Proof of Work) blockchain, validators maintain and verify the integrity of transactions by checking new blocks with the help of a distributed network of servers called "nodes". Specialized nodes called Validators, like us at Staking Facilities, are responsible for providing computing power necessary not only keeping up with other stakeholders around them but also maintaining overall security via monitoring accuracy within one another.

With the help of other validator nodes, the blockchain network's security, accuracy, validity, and availability are maintained.  For investing in the infrastructure and providing these services, validators receive rewards.  These rewards come in the form of newly minted tokens distributed by the network and staking fees, paid for by the users transacting on that particular blockchain.

With every Proof of Stake token is the right to contribute, validate and mint new blocks to the network thus helping secure the blockchain.

For many PoS blockchains, like Polkadot (DOT) and Cosmos (ATOM),  token holders may want to help decentralize the network and contribute to its security but don't necessarily want to make a big investment to become a validator.  Token holders are given the option to delegate their tokens to a validator of their choice which increases the validator's stake.  The token holder thus assumes the role of a "delegator."  It's important to know that a delegator isn't transferring the ownership of their token, but rather the rights contained within each token.  The original token holder will retain custody and legally owns their delegated tokens at all times but will reap the rewards passed down from the validators they delegate to.  By participating in the staking economy, validators and delegators avoid the dilutions of their crypto assets due to inflation that may be caused by block rewards.

Staking coins is a great way to foster network participation by encouraging the people holding the native coin on a PoS network to help further secure the network. This is done through an incentive approach where staking rewards are given to users who stake their cryptocurrencies with a share of the network fees.

How does crypto staking work?

Proof-of-Stake is a mechanism to find and appoint the next node to construct and append the next block to the blockchain, which renders this node a validator. Staking refers to the process of locking your PoS token into a smart contract to signal the intention upon the right to validate and add blocks, which is contained in every PoS token. The locked tokens are referred to as stake. In general, the more stake is attributed to a validator, the higher the likelihood of the respective validator being chosen to append the next block. The stake attributed to a validator can either be their own or stake delegated to the validator by other token holders - more on that later. From a non-technical perspective, this process can be compared to a lottery drum: the more stake a validator has, the more tickets the respective validator is allowed to put into the drum. Randomness also plays a crucial role in avoiding a 'rich-get richer' scenario (similar to the lottery drum scenario).

Crypto staking not only benefits the network but also offers significant benefits to the user. It creates a way for the holders of the network's native cryptocurrency to participate in the network without the need to invest in expensive hardware. It also provides the perfect opportunity to earn while holding since users can stake crypto for as long as they want and withdraw at any time. Thus, users get the best of both worlds because they earn additional crypto without parting with their holdings.

What is a validator?

Despite its different approach compared to Proof-of-Work, Proof-of-Stake still requires a network of computers to process the transactions. Those computers or servers are often referred to as nodes of the network. They are distributed across different locations and legal entities. Anyone can participate in the network through staking. Still, the capital requirements and the required technical knowledge for running a node can be relatively high, depending on the quality of the operation.

Like us at Staking Facilities, those who run those nodes are described as validators, and we provide the infrastructure upon which the blockchain runs. Our role as validators is to uphold the validity of data and its accuracy while also contributing to network security. The rewards for such a network role are often high because of the initial investment, the cost of running the operation securely, and methods to distribute rewards to those who stake with us.

However, being a validator isn't always full of rewards.  If a validator doesn't comply and participate fairly, they risk having their stake slashed. Slashing means a proportion of the staked cryptocurrencies are burned as a form of on-chain punishment that ensures that validators correctly do their job. Likewise, the users who choose to delegate their staked crypto to such a validator also run the same risk; however, this varies between networks.

What is a delegator in crypto staking?

Since running a professional validator requires quite a bit of technical knowledge and capital expenditures such as hardware (ideally) or at least cloud instance and professionally trained staff, it is not a suitable nor desirable role for everyone.

Suppose token holders want to participate in staking without having to run their own validators. In that case, they can delegate the right to secure the validity and utility of the blockchain contained in every native PoS token to a validator of their choice.

Crypto holders who choose to become delegators should keep in mind that the validators will charge a fee or a commission for the service they provide. Therefore, when selecting a validator, one must take a look at the type of quality they bring into their operation, their community support and engagement, as well as their technical setup.  One other indicator is seeing how much of their own token they have staked on their own nodes.  At Staking Facilities, we believe in having "skin in the game," which is why we only provide staking services for tokens we hold ourselves.

The most significant benefit that delegators enjoy is the ability to stake and earn money from their crypto holdings. Their passive earnings are determined by the size of their stake. Thus, the more crypto stakers delegate, the more they are rewarded.

How does Proof of stake work?

Proof of stake is the consensus mechanism that allows a person to validate block transactions based on how many tokens they hold. Cryptocurrency holders can accomplish this by locking up or staking their tokens on the network to enable the creation of new blocks. In some cases, the block validation process facilitates the minting of new tokens, often distributed to the validators as network rewards.

The PoS consensus mechanism also facilitates the distribution of network fees collected from transactions to the network validators. PoS protocols also randomly pick the validator that will create the next block. The amount of crypto staked by each validator is part of the criteria used in the random selection. The other validators on the network confirm the selected validator's work, thus confirming that the transaction was conducted as intended.

There is a specified duration or period of time during which the selected validator is supposed to create a block. That duration is known as a slot, and in Ethereum 2.0's case, each slot lasts 12 seconds, and 32 slots make an Epoc. A group that consists of 128 users is created after each Epoc and is notified in preparation for their Epoc.

Creating blocks in PoS does not require mining, as is the case with Proof of work, and consequently, very little energy is required to mint a new block. This makes PoS significantly more efficient in terms of energy consumption and also the time it takes for block creation. Since PoS is less energy-intensive, this usually results in a higher transaction throughput for many blockchains.

Staking rewards is why PoS blockchains have been gaining popularity, mainly because they provide an avenue for crypto holders to earn some passive income. As noted earlier, staking rewards often come from the transaction fees generated by the network and the tokens minted when new blocks are created. However, some crypto lending platforms and crypto exchanges also enable staking, where crypto holders contribute to the pool of funds available for borrowing. Some of the loan interest profits are then shared among those staking in the pool.

Staking is arguably the best way to obtain a form of passive income in the crypto market. However, there are still some risks that investors may face, and the most significant one is probably the risk of getting slashed if a validator fails to fulfill their duty. This may result in a total or partial loss of the stake attributed to the respective validator, impacting them and their delegators.

There is also the risk of several of these blockchains failing to gain significant traction and adoption. As with many speculative investments, whether cryptocurrency or stocks, only a handful of these projects will stand the test of time.  Doing your own analysis and due diligence should go without saying at this point.

How to get started staking your crypto

Before you start your crypto staking and DeFi journey, you should first conduct research to determine which blockchains have long-term utility and contribute to the ecosystem's growth as a whole. The higher the long-term growth potential, the more you stand to earn from your investment as your staked crypto gains value. Also, keep compound interest in mind when planning to leverage more growth in the future. Finally, consider plowing back some of your profits so you can compound your earnings.

If you're interested in learning more about the networks we choose to run infrastructure for, please visit our about page on our network tokens. You can also access staking guides to Solana, Eth2, and more.