Secure blockchain ecosystems by staking tokens and participate in the next evolution of the internet!

We are active throughout the Web 3.0 stack 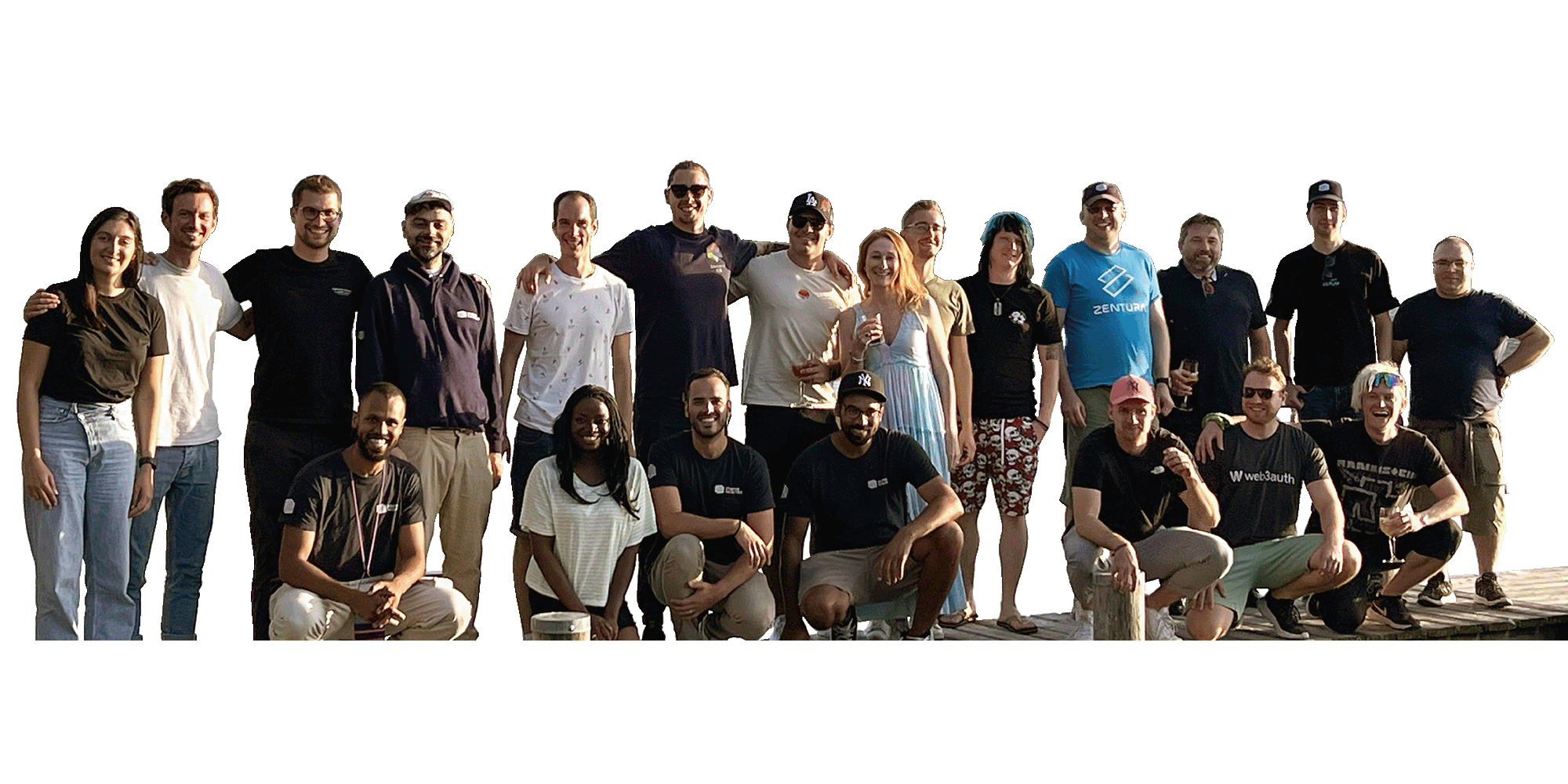 We are a validator, node operator, and service provider in Web 3.0
We operate industry-grade, highly secure physical infrastructure for next-generation blockchains to run on. We offer non-custodial staking services for Proof-of-Stake token holders and provide essential services for the Web 3.0 ecosystem.
About Us
keyboard_arrow_right

The security of our customers' stake is of utmost importance to us. Through redundant infrastructure and connectivity, failover systems, 24/7 monitoring, as well as colocations at top-tier data-centers, we provide outstanding standards of security.

We provide a custom staking framework for a variety of clients and offer state-of-the-art reporting. We actively shape the legal framework for the blockchain ecosystem in Germany, and Europe through our membership in the European Blockchain Association.

We put our money where our mouth is! We are customers of our services and stake a substantial amount of our own tokens on our validators. This guarantees that our incentives are best aligned with those of our customers.

Engagement in the community beyond the mere operation of infrastructure is one of the most important components of our ecosystem strategy. We focus on information, education, and the development of valuable community tools.

Through our non-custodial staking services, Proof-of-Stake token holders can contribute to the security of a network and earn rewards for doing so.
How it works
keyboard_arrow_right
Stay up to date
& filter through the noise
Subscribe to our monthly newsletter for news & updates about our portfolio projects & the staking ecosystem
Subscribe

In addition to running highly secure, enterprise-grade infrastructure and offering a seamless staking experience, we build tools for the overall Web 3.0 ecosystem. Through these tools, we want to accelerate the adoption of Web 3.0 technologies by offering user experiences that are as smooth as those in Web 2.0. Staking with us means supporting us on this mission.

Staking Dashboard
Our staking dashboard offers a comprehensive overview of your staking operations - regardless of your validator. Get full analytics such as payout history, portfolio distribution, and a total valuation of your staking assets. Conveniently export everything as a CSV.
Start Tracking
keyboard_arrow_right

Solana Beach
We built the frequently used and community loved network explorer Solana Beach. It empowers stakeholders of the Solana blockchain to seamlessly explore the network's statistics, validators, and token metrics. We are working tirelessly on new tools and features - stay tuned!
Explore Solana
keyboard_arrow_right
Staking Academy
We believe in a truly open economic system accessible to everyone. To make the onboarding as smooth as possible, we offer a variety of tutorials, introductions, and educational content. The Staking Academy is our comprehensive, curated knowledge base.
Learn More
keyboard_arrow_right

What is a Blockchain?

A blockchain is an immutable, distributed ledger of transactions which is maintained by a peer-to-peer network rather than a centralized authority. It can be thought of as a distributed database that gets synchronized as soon as changes are made.

Blockchain technology utilizes powerful consensus mechanisms (such as Proof-of-Stake) alongside crypto-economic incentives to verify the authenticity of transactions, secure the peer-to-peer network, and nominate nodes (special peers in the network) to generate blocks.

Proof-of-Stake (PoS) is a consensus algorithm used for the generation of new blocks. It requires validators (special nodes running the blockchain) to stake the network's native token in order to propose and/or validate new blocks and ultimately earn rewards. A stake may be slashed by the network and thus disincentives bad behavior.

What is a Validator?

Validators are special nodes in PoS-networks, more precisely delegated Proof-of-Stake networks. They operate the blockchain infrastructure, propose and validate new blocks, and receive rewards (in the form of new tokens) for doing so.

What is a Delegator?

Token holders who want to stake their tokens but do not want to run a validator node, are called delegators. They can still contribute to the networks' security and earn rewards by delegating their tokens to a validator of their choice and thus use the validator’s infrastructure instead of setting-up and maintaining their own servers. For some networks, in the event of a validator misbehaving according to the protocol, delegators of the respective validator will also be penalized by the blockchain network in proportion to their staked assets. We therefore advise you to carefully choose your validator infrastructure.

What is a Node Operator?

Similar to validators, nope operators are special participants within blockchain networks. For the different networks across the Web 3.0 tech stack, that we work with, we differentiate our role between validator and node operator. The former allows us to accept delegations by token-holders, whereas we do not accept delegations in the network in which we function as a node operator. In these networks, we provide services to the network such as data indexing or providing off-chain data as an oracle.

Web 3.0 is also referred to as the "Internet of Value" or the "Stateful Web" and is considered as the next evolution of the internet after Web 2.0 and Web 1.0. Web 3.0 is the result of technologies such as AI, IoT, or blockchain converging. Blockchains play an important part as they allow for an alternative to the client-server model in which data is centrally controlled and managed by trusted institutions. This has oftentimes led to privacy issues, monopolistic tendencies, hacks, and data breaches. In the current internet, it is not possible to transact value in a digital native manner. Cryptography and game theory, used in blockchain networks, allow for an alternative to the current architecture of the internet. One that is powered and secured through decentralized infrastructure. Blockchain technology provides a "clearinghouse" and settlement layer to the internet, overcomes single points of failure, allows for digitally-native assets, as well as collaboration and coordination on a global scale. We are pioneering this new digital frontier. Join us on this exciting journey!

What is non-custodial staking?

Non-custodial staking refers to the process of using a validator’s infrastructure by delegating the capability to work for the blockchain and provide infrastructure to the blockchain and ultimately earn rewards by the blockchain network for doing so to someone else. This applies to every Proof-of-Stake token. Delegating tokens is not the same as sending tokens, because delegators do not transfer ownership in the token itself. The original holder remains the legal owner of the tokens at all times. Hence, the holder does not give up custody of his/her token.

Why should I stake my tokens?

Proof-of-Stake blockchains are inflationary as new tokens are rewarded for generating and validating new blocks. Token holders who are not engaging in the staking process - either by operating as a validator themselves or by delegating their tokens to validators and thus using the validator’s infrastructure - stand to lose out on rewards and see their assets getting diluted over time.

What are the risks associated with delegating my assets to Staking Facilities?

Since we offer non-custodial delegation services for our networks, we never have control over your assets. Rest assured, you are always in full control of your assets and can withdraw the delegation at any time. By delegating to us, your assets are virtually added to our stake. The blockchain network automatically transfers rewards to your blockchain address and we keep a small fee as a consideration for operating the infrastructure you use. We offer a transparent service and operate industry-grade architecture in order to achieve our goal to always meet the protocol’s service levels (e.g. no double signing; going offline etc.) and to avoid slashing. Please visit the subpage of the respective protocol for more details. For general information about risks refer to our terms which you accept by delegating tokens to our validator.

Further risks include: key/asset mismanagement by the enduser resulting in loss of funds; protocol errors; or attacks against the network.

Our validation services are non-custodial. We therefore have no access to your tokens at any point in time. It is simply impossible from a technical perspective. You maintain full control over your tokens at all times.