What are Proof-of-Stake and Staking?

Get up to speed on all things staking with this comprehensive introduction to Proof-of-Stake. 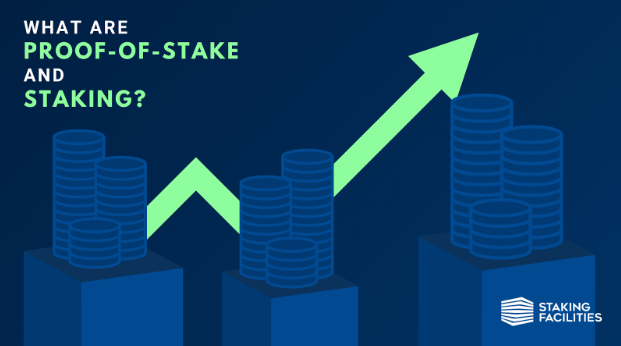 When you have a strong long-term perspective on a certain cryptocurrency, staking might be an excellent way to grow your digital assets. But for some that are just starting to use Proof-of-Stake blockchain networks, this concept might not be as clear as it could be. That is why, in this crypto article, we are going to explain Proof-of-Stake and staking to you in the simplest way possible.

To fully understand what Proof-of-Stake (PoS) is, it is important to first understand how it exists and how it differentiates from other mechanisms such as Proof-of-Work.

The issues with Proof-of-Work

Proof-of-Stake (PoS) mechanisms were created in order to try to solve some existing issues found in Proof-of-Work (PoW). These issues include, but are not limited to, high energy consumption, high entry barriers, geographical concentration, and high costs. But why does PoW have these issues in the first place.

It is important to note that although Proof-of-Stake and Proof-of-Work are oftentimes referred to as consensus algorithms, they are not quite the same, especially when it comes to energy efficiency. While they are closely related concepts, they are rather to be considered Sybil resistance mechanisms. Proof-of-Work is part of the Nakamoto Consensus family and has been popularized by Bitcoin (BTC). Whereas Proof-of-Stake is part of the Classical Consensus Algorithm family with Byzantine-Fault-Tolerant or BFT being the most popular one. Most PoS blockchains today use the BFT consensus mechanism.

A protocol might theoretically just choose a random node to propose each new block. However, here is where the issue of identities enters the picture. Identity verification is difficult on the internet. For example, by executing numerous versions of the same application, one individual may claim to be any number of people in order to wield disproportionately great influence (this would be considered a ‘Sybil attack’).

To remain secure, blockchain technology must prioritize a way to prevent a dishonest individual or group from cheating or taking over the majority of validation nodes. One proposed remedy is to make it more expensive for a single individual to masquerade as hundreds or thousands of identities. This method is known as "Sybil resistance." PoW does this by making miners solve a difficult computer puzzle. In order to solve this puzzle, they need to acquire vast quantities of expensive hardware that consumes a lot of electricity.  This is why Bitcoin mining can get such a bad rap from the media surrounding environmental impact.

Thus, PoW became a very expensive protocol to become part of. On top of that, the hardware that consumes high amounts of energy started to become very concentrated in regions where electricity was cheaper.

The potential of Proof-of-Stake

Amid these challenges faced by PoW protocols, PoS employs a drastically different sybil-resistance technique. Instead of depending on a computationally demanding process, PoS selects block proposers using the networks' native tokens. PoS is built on the notion of choosing block proposers based on how much value they are prepared to lock in for this purpose. The more tokens someone is willing to lock, the more likely it is that they will be chosen to propose the next block. The process of committing a blockchain's native token to become a validator is known as staking. This dynamic will be further explored in the next section.

This way, PoS protocols like Solana or Ethereum 2.0 (ETH) are more environmentally friendly and account for scalability than current PoW mechanisms. The PoS system leaves behind the waste of significant amounts of power contending for the privilege to propose the next block of transactions used in PoW. Instead, they allow users to swap the use of electricity with capital. Because no computationally complex operations must be solved in PoS protocols, the amount of energy required to power the blockchain is considerably reduced. Thus, PoS is run by validators instead of expensive and energy-consuming miners.  And unlike PoW, blockchain validators don't need to use significant amounts of computational power since they're selected at random. This results in cheaper, easier to join, and more performant networks. As a result, PoS protocols are usually more scalable and ecological than PoW blockchains like the Bitcoin Network.

Now that you understand the detailed explanation of how Proof-of-Stake came to be, it is possible to give a shorter definition of what it is.

Proof-of-Stake is a sybil resistance mechanism that operates by allowing users to lock tokens (their "stake"), and then giving the authority to validate the next block to a validator at random intervals, usually based on the total voting power the validator has accumulated. This guarantees that the network is always being verified in a decentralized matter.

Staking involves locking the respective blockchains’ native token in a smart contract in order to signal to the networks ones’ intent to participate in the maintenance of a blockchain network's security and operations.

There are two main players in the staking process: validators and delegators. The idea is that both gain from this dynamic that has the final goal of keeping the blockchain network secure and operational. So how does each of these contribute to staking?

Validators, like Staking Facilities, are responsible for maintaining the infrastructure, validating new blocks, and appending them to the blockchain. Staking Facilities, for instance, is a validator that operates in PoS protocols. Together with other validators, they ensure the blockchain’s security by monitoring its accuracy, establishing validity, and guaranteeing availability. In other words, a validator is a special entity, or a special “node”, that validates transactions and, if chosen, produces a new block in exchange for transaction fees and block rewards, both in the form of the networks’ native tokens.

To deter validator misconduct and downtime, most PoS blockchain systems include a punishment mechanism known as slashing. While the mechanics of slashing differ depending on the protocol, it typically entails the loss of a preset proportion of the tokens assigned to a validator when they do not act as they should.

Delegating tokens differs from sending tokens in that delegators only transfer the rights contained in their tokens without transferring ownership of the token itself. The original holder always remains the legal owner of the tokens. Token holders are encouraged to participate in the Proof-of-Stake process to earn rewards and to avoid the dilution of their funds due to the inflationary character, which is caused by block rewards.

There are some risks attached to becoming a delegator. If the chosen validator to stake with suffers a slashing for misconduct, it can result in the delegated tokens being (partially or fully) burned. As a result, the delegator would also lose capital together with the validator. These might vary on the network the delegator is staking at, with some only slashing the validator. Still, ultimately, it is the delegator’s responsibility to do their due diligence before picking a validator.

Also, it is important that the delegator understands the unbonding period, which is the period of time they will have to hold staked tokens before being able to sell or transfer them. The unbounding period varies a lot from network to network and can go from a few minutes to several weeks.

Hopefully, this article explained in a simple way how Proof-of-Stake and staking work. This can be a very complex subject but is essential when it comes to understanding the blockchain ecosystem. In addition, we truly believe that staking will secure the world’s most precious digital public infrastructure. This belief is substantiated by the increasing dominance of PoS networks.

Let’s hear about it!

Missing anything? Thoughts, feedback, or questions about the post?

Please note that none of this is to be considered financial nor investment advice. We highly advise you to always do your own research (’DYOR’) before interacting with any of the projects or tools we write about. Crypto is a highly dynamic and fast paced environment with lots of moving parts that can quickly change.