The Ethereum Merge: What It Is and What It Changed?

A closer look at one of the biggest updates in the brief history of the blockchain industry. 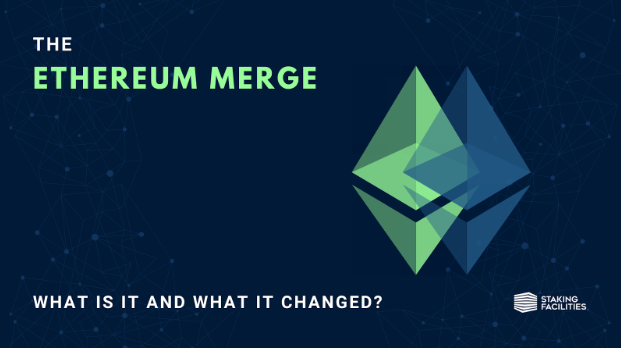 Updates to blockchain networks are nothing new. These upgrades are necessary to ensure each network’s stability and that they properly work in the rapidly changing online environment. One of the most discussed upgrades in the crypto industry (and maybe even beyond) was the Ethereum Merge on September 15th. This article explains what it means and how it can influence your interactions with ETH.

But let’s revisit some of the basics before we jump in, shall we?

Ethereum is a public blockchain that powers smart contracts and is the second-largest cryptocurrency by market capitalization. The latter are blockchain-based applications or protocols that run in accordance with pre-set conditions. Public blockchains are highly resistant to censorship, fraud, or third-party interference. The Ethereum network was established by Vitalik Buterin in 2015, and it quickly became one of the most popular networks next to Bitcoin.

The Ethereum network has its own token called Ether or ETH. It became a foundation for many crypto projects and DeFi apps because of its versatile abilities and popularity. Until recently, the Ethereum blockchain was a Proof-of-Work (PoW) blockchain, the most “traditional” blockchain consensus model where miners would validate transactions within an Ethereum block.  However, after years of preparation along the Ethereum roadmap, on September 15th, 2022, the Ethereum foundation initiated a crucial change to its operational structure after several Ethereum improvement proposals. This shift was called "the Merge." But before we dive into it and what the Merge represents, let's first understand the difference between Proof-of-Work and Proof-of-Stake.

To fully understand why the Merge happened and what its consequences mean to the Ethereum protocol, you have to understand the difference between Proof-of-Work (PoW) and Proof-of-Stake (PoS). That’s because it’s the exact change that the Ethereum blockchain went through - it moved from the Proof of Work (PoW) to the Proof of Stake (PoS) model, and many call this evolution "Ethereum 2.0." Simply put, this consensus engine stops relying on miners to process transactions within the network and provides infrastructure for the entire network. In return, these miners were given block rewards for block production. Validators such as Staking Facilities are now taking over from miners (more on that later).

The Issues with Proof-of-Work

PoW was the original consensus mechanism in crypto, introduced by Bitcoin. It relies on enormous amounts of computing power and thus, energy consumption. Initially, it wasn’t hard to mine BTC and other coins based on PoW. But, as time passed, more and more hardware was required to participate successfully in mining. The situation escalated so much that the “ordinary” network users had to back down in favor of huge, costly mining centers with hundreds of computers that require tons of energy to successfully participate in PoW. The monopoly of large mines creates a huge entry barrier and is questionable in terms of ethics, environmental safety, and territorial centralization amongst the network.

The Advantages of Proof-of-Stake

Proof-of-stake was introduced to address the problems that arose from the PoW approach by employing a different yet also sibyl-resistance technique. PoS leaves behind the computationally demanding process of PoW and instead selects block proposers using the networks' native tokens. The PoS structure is based on choosing block proposers (aka validators) based on how many tokens they are willing to lock in (‘put at stake’ as a security deposit). The more tokens someone is willing to lock, the more likely they will be chosen to propose the next block. This process is known as staking. Think of it as a lottery drum - the more you put at stake, the more tickets with your name on it you are allowed to put in the drum.

This way, Proof of Stake (PoS) protocols are more environmentally friendly than current PoW mechanisms. Proof of Stake is run by validators instead of expensive and energy-consuming miners. The entry barriers to becoming a validator are much lower than the ones to become a miner. Many validators can still earn rewards for participating in the system. This results in cheaper, easier-to-join, and more performant networks. As a result, PoS protocols are usually more scalable than PoW blockchains; this - amongst other things - has made the PoS model more popular among crypto enthusiasts.

On Thursday, September 15th, a historical event called “The Merge” happened in the Ethereum community. After years of preparation, community votes and high demand - Ethereum became a Proof-of-Stake network.

Before that, the Ethereum blockchain had two branches. The Mainnet was based on the PoW model and the Beacon Chain used PoS. The former was the original Ethereum chain. The latter was the PoS consensus layer of Ethereum that had been operational separately from the Mainnet since December 1, 2020. Thus, transactions were being processed in the Mainnet, while the Beacon Chain was only being tested in parallel.

The Merge was the integration of the Beacon Chain to the Mainnet and the discontinuation of the PoW consensus mechanism. From the moment of the Merge, Ethereum became a Proof-of-Stake blockchain, and mining was no longer a thing on Ethereum.

Ethereum Merge: What Will Change and What Won’t?

The Ethereum Merge is a positive and crucial shift into Ethereum 2.0 that brings many improvements to the ecosystem, decentralized applications, and all Ethereum developers. You might be guessing some changes that surged because Ethereum now operates on the Proof of Stake (PoS) model. However, not everything is different now. So let’s check what changed and what didn’t with the Merge.

First and foremost, according to Ethereum’s official website, the blockchain’s energy consumption decreased by 99.95%, which is an impressive result. When crypto businesses (mostly the ones that operate using PoW) are criticized for being harmful to the environment, it is one of the best decisions to make. Quitting the old approach allows Ethereum to be more sustainable and keep its high position in the market. From an investor’s point of view, ETH is now ESG compliant :)

The level of decentralization is supposed to increase because anyone looking to join the network won’t need an insane amount of hardware and computing power to participate in the network's consensus engine. However note that if you want to run a validator on your own, you need to put up 32ETH as stake - this is quite a bit of dough you need to come up with. However, projects such as Lido, allow you to contribute to the networks’ security without having to put up such a high amount of stake.

Ethereum Became Faster, But Not Really

Even though Proof of Stake (PoS) blockchains tend to be faster than PoW ones, The Merge did not significantly increase the network’s speed. According to the Ethereum Foundation, the move to Proof-of-Stake did result in blocks being produced roughly 10% more frequently than PoW. That is theoretically faster, but the difference is so low that users will probably not feel it in practice. Thus, speed has practically remained the same.

Ethereum Did Not Become Less Expensive (For Now)

Many were expecting that The Merge upgrade would make Ethereum more affordable by reducing gas fees. Unfortunately, that is not the case, at least for now. As the Ethereum Foundation clarified, “The Merge is a change to the consensus mechanism, not an expansion of network capacity, and was never intended to lower gas fees.” Therefore, since ETH is needed to pay for transactions in the network, transaction fees or gas fees are still expected to be as high as they were. However, the foundation did mention that this will change with future updates.

What Can You Expect for Post-Merge Ethereum?

The biggest change that can influence the community is ETH's switch from inflationary to deflationary. That’s due to its reduced issuance, meaning fewer tokens will be issued within one block. While it took some time, the network became officially deflationary at the beginning of November 2022. You can always check here to see where we’re at right now: https://ultrasound.money/

The smaller token supply can have several consequences, not all of them positive. It’s already reflected in the Ethereum price that dropped after the Merge. That’s not good news for investors, but it can be in the long run. For ETH owners that will hold, the Ethereum price will probably get back to its previous state and beyond. The reason is simple - fewer tokens in circulation means that a single coin might be more valuable (typical supply & demand economics).

We have to wait to find out how Ethereum’s future as a Proof of Stake network will shape and play out in the long run. In addition, the Ethereum roadmap still has some updates to come, one being the Shanghai upgrade.

Let’s hear about it!

Missing anything? Thoughts, feedback, or questions about the post?

Please note that none of this is to be considered financial nor investment advice. We highly advise you to always do your own research (’DYOR’) before interacting with any of the projects or tools we write about. Crypto is a highly dynamic and fast paced environment with lots of moving parts that can quickly change.