Guide to Serum DEX: What is SRM?

Serum DEX is a decentralized exchange within the Solana (SOL) ecosystem designed to overcome weak points found in centralization and on other blockchains. 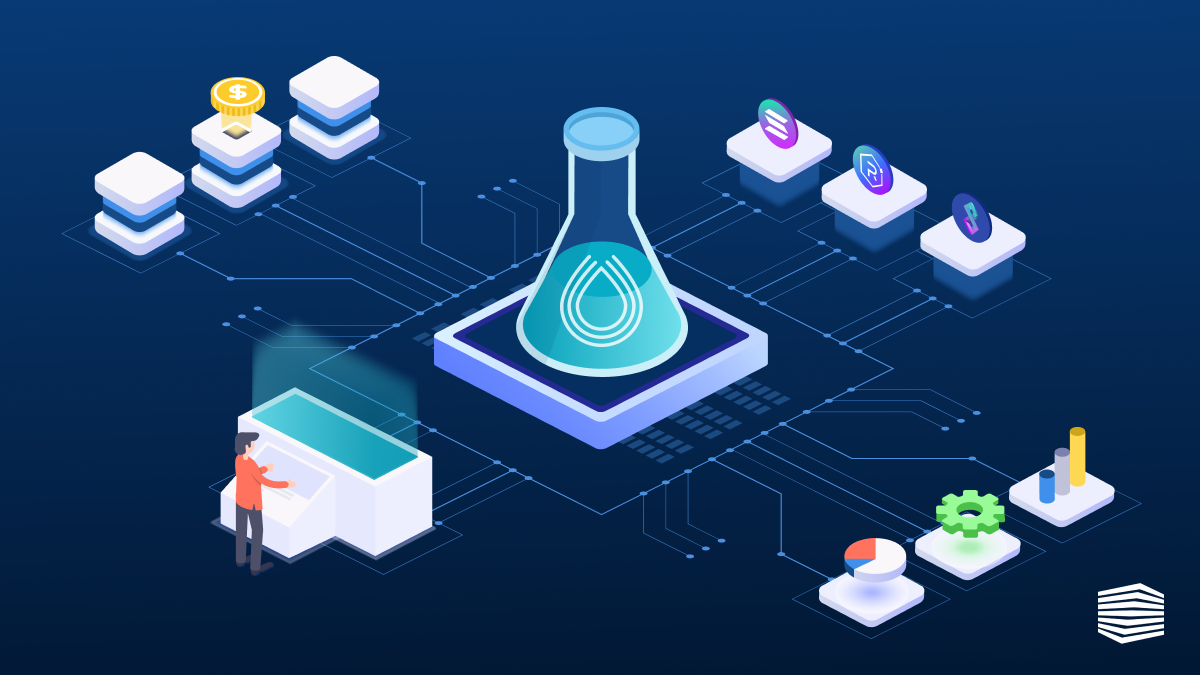 Serum in a nutshell

Serum is a DEX or decentralized exchange created by an organization called Project Serum, which aims to be the ultimate conduit for interacting within decentralized finance and the greater Solana (SOL) ecosystem.

With many people now piquing their interest in what DeFi is, one may assume that the adoption and onboarding of more people will take place rapidly over the coming years.

Some of the most popular networks right now, such as Ethereum, have been experiencing high fees as network demand rapidly continues to grow.  Project Serum developers have observed the challenges and have developed Serum on top of Solana as a futureproof DEX that leverages the underlying blockchains' low fees, high liquidity, and high throughput.

The Project Serum team wants the Serum DEX to be at the helm of the decentralized movement.  The potential is to compete with higher market cap DEX-es such as 1inch, SushiSwap, and Pancakeswap. Blockchain technology, the underlying tech behind cryptocurrencies, is defined as a decentralized ledger that brings many advantages to finance.  But it's important to note that the most popular cryptocurrency exchanges are centralized entities like Coinbase, Binance, Kraken, or Gemini.  The centralization creates points of weakness for malicious actors to exploit and unfavorable regulations by government entities.

Decentralized exchanges such as Serum plan to overcome these points of weakness while making it possible for people to maintain full custody and control of their finances.  This article will help you understand Serum's role in Web3 and why it is different from other existing or upcoming decentralized exchanges.

The FTX exchange and Alameda Research collaboratively developed the Serum DEX in 2020 to provide DeFi users with something that had not been possible before the launch of Solana; a decentralized exchange that leverages a central limit order book or 'CLOB' for short.

The people behind Serum

Serum has a fascinating history because its development team is led by Sam Bankman-Fried, who previously worked as a Wall Street investment banker.  Sam also worked at Jane Street Capital as a financial advisor before leaving in 2017 to start a crypto trading and research firm known as Alameda Research.  The latter handles a sizable portfolio of traded assets, including derivatives and digital assets.  Sam Bankman-Fried, aka 'SBF,' is also the founder of FTX, which is currently one of the most popular crypto exchanges.

A look at how Serum functions

Serum does not have its own blockchain but rather is built on the Solana blockchain.  The latter is currently one of the top smart contract blockchains and one of the more affordable ones regarding transaction fees.

Today, many popular decentralized exchanges are built on the Ethereum blockchain, but bottlenecks such as high gas fees and slow transaction speeds have resulted in a poor user experience.  Solana is already operating at a higher transaction throughput thanks to core innovations such as Proof-of-History.  With transaction speeds of around 65,000 TPS, Serum can work without the typical constraints seen on Ethereum and Bitcoin.

Solana's role in Serum's operations goes deeper than the TPS.  For example, the DEX relies on the SLP standard, similar to how Ethereum DEXs rely on the ERC-20 standard.  SLP tokens, the token standard for the Solana blockchain, can easily be traded within Serum, and non-SLP tokens must be "wrapped" for them to be used within the Solana ecosystem.  Since 'external' tokens like ETH and BTC can be wrapped, people trading on Serum can still maintain exposure to popular market pairs and are not limited to only SLP standard tokens.

Most of the existing exchanges rely on an automated market maker (AMM)approach, but Serum takes a different approach.  Serum uses an on-chain central limit order book model instead.  This means an on-chain order book not only uses a fully automated order matching approach to place orders but also gives traders more control over their trades.

How do cross-chain swaps work on Serum?

The Serum DEX leverages the power of smart contracts and economic incentives built into the protocol to enable the trustless swapping of digital assets across different blockchains.  Some collateral is required by the parties participating in buying and selling for a swap to be conducted successfully.  If one party does not receive the funds within the stipulated time frame, they can raise a dispute where smart contracts will take action based on a snapshot of the requested funds.

If the smart contract determines that the dispute is valid, the recipient receives the amount staked as collateral by the sender, and if the conflict is invalid, the recipient's stake is sent to the sender.  This approach ensures that both parties perform their duties as intended while punishing any false dispute attempts.

The SRM token and its role on the Serum DEX

SRM is the native token on the Serum DEX.  It exists as an SPL token on Solana and an ERC-20 token on Ethereum.  It has special use cases, such as staking to run validator nodes for the decentralized exchange.  Serum tokens can also be used to pay for fees.  SRM can also attract a fee waiver of up to 50% when used to pay transaction fees, thus creating additional incentives to hold SRM tokens.  The token has already been listed on major exchanges like Binance and Uniswap. Serum DEX is also integrated with Binance, AscendEX, Ethereum, FTX, Gate.io, Mango Markets, MathWallet, OKEx, Phantom, Raydium, and more.

Project Serum has announced plans to use the SRM token for governance in its other trading platforms in the future.  A critical aspect of the Serum DEX is that 68% of all the trading fees collected on the exchange are used for SRM token buybacks and token burns.  This means the token has deflationary characteristics, which provide additional utility and value.  SRM also exists in Megaserum (MSRM), which is equivalent to 1 million SRM.  Those running validator nodes often use MSRM.

Note that the majority of the SRM tokens are currently locked.  Only 10% of them are unlocked at the time of writing, while the remaining 90% will be unlocked over time.  This might affect the circulating supply if the seed investors sell, thus potentially pushing down the price.  Alternatively, users may opt to stake their tokens to earn passive income through a share of the transaction fees collected by the DEX.

What is special about the Serum DEX?

The Serum DEX has numerous advantages over other exchanges, especially centralized exchanges, such as eliminating intermediaries and maintaining custody of funds.  The lack of centralized authority is an added advantage because it eliminates risks such as account suspension, facilitates lower transaction fees, and eliminates the need for approvals from centralized authorities.  The flexibility offered by the Solana blockchain ensures that Serum has numerous other use cases beyond the scope of other crypto projects.  Solana is currently one of the most scalable blockchains, and this plays into Serum's capacity to handle a high number of transactions.

There are multiple reasons why anyone would want to use Serum to trade cryptocurrencies.  First, the cryptocurrency market is maturing, which has prompted many regulators to implement strict and unfavorable regulations on traders.

For example, regulators might implement rules that will require KYC for all traders and lot size limitations.  Although such measures are not yet in place, they might be rolled out soon, making the trading experience less smooth.  Serum presents a chance for traders to bypass those limitations potentially.

Serum is an avenue for traders to take complete control of their finances and investments, as well as the security of their digital assets.  Traders can achieve this by storing their crypto holdings in secure digital wallets.  Many of the currently existing decentralized exchanges are limited in cryptocurrencies and digital tokens listed.  However, the Serum DEX overcomes the listing limitations by wrapping the non-SLP tokens and crypto.  This ensures that the Decentralized exchange has a wide variety of cryptocurrencies available at any given point.

Staking in Serum is an excellent way of making passive income in the form of network rewards while contributing to the project's security.  The most lucrative approach to staking on Serum is by running a node.  However, this would require you to have 10 million SRM tokens worth more than $60 million at the time of writing.  Fortunately, there is an alternative.

SRM token holders can delegate their stake into an already existing node.  However, the node operator or team receives a small facilitation fee out of the staking rewards, and the rest goes to the SRM holder.  This is much lower than the earnings they would have achieved by staking in their node.  Fortunately, anyone can create a node and invite other SRM holders to become stakers on that node.  However, operating a node requires a significantly higher level of technical knowledge and responsibility, such as participating in governance.

Node rewards are distributed in SRM at a standard APY of 2%.  However, nodes can increase their potential rewards by handling various duties and challenges, such as collateralizing SRM tokens.

Serum's validator nodes are tasked with manually activating orders that are not automatically fulfilled, a process called "turning the crank." The validators also provide cross-chain crypto swap support.  SRM's role in governance extends to proposal tabling.  The cost of tabling a single proposal is 50,000 SRM, and this amount is refunded to the originating node if it is passed, but if the proposal is rejected, the 50,000 SRM gets burned.  This process ensures that only high-quality proposals that will likely improve the protocol are brought forward.

Decentralized exchanges are rapidly becoming popular, and Serum plans to capitalize on the crypto market's direction.  Fortunately, Project Serum has created a well-thought-out DEX that focuses on users' needs while overcoming the challenges plaguing other exchanges.  The level of success that an exchange like Serum will achieve ultimately depends on its ability to prove itself superior to the competition, a task that Project Serum and its community are excited to take on.