In this article, we dive into Ethereum vs Ethereum Classic. Understand the history, the differences and benefits to each token. 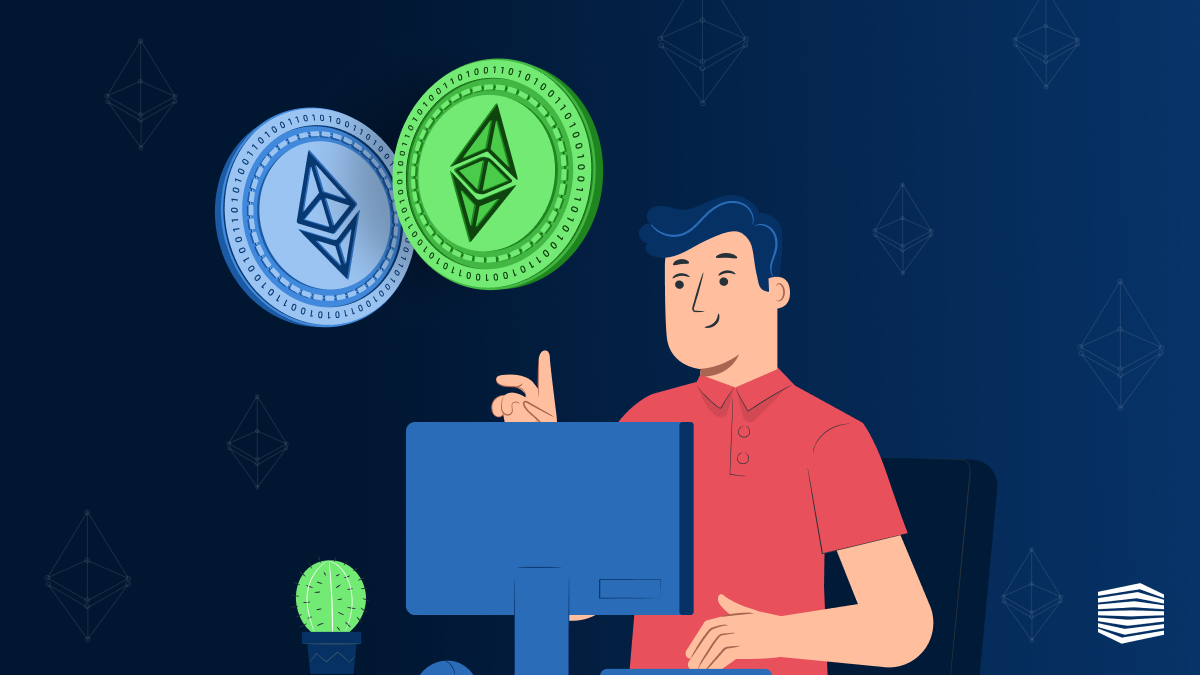 Comparisons between digital assets are commonplace in the cryptocurrency market, where many digital coins are stacked up against each other. But one of the most iconic comparisons is Ethereum vs. Ethereum Classic. Many people know the two cryptocurrencies, but few understand their history, differences, and why they both exist.

There was only one Ethereum network to rule them all at some point in the past, but a major hack in the network resulted in a hard fork that led to the existence of Ethereum and Ethereum Classic.

However, it goes much deeper than that. By the time you finish reading this piece, you'll have a deeper understanding of Ethereum and Ethereum Classic differences.

The History of Ethereum

Ethereum founder Vitalik Buterin came up with the idea of creating a decentralized network that would allow applications to run automatically through smart contracts. He launched a crowd-funding event for his idea in July 2014, through which he managed to raise 25,000 BTC valued at $17 million back then.

Vitalik figured that adding smart contract functionality was the perfect approach to creating blockchain-based applications. Early investors jumped on board upon realizing that smart contracts would facilitate blockchain networks' open-source and immutability capabilities, thus making them appealing to businesses.

Vitalik and his team commenced the network's development in 2014 and launched it in July 2015. The blockchain reached block number 200,000 in September of the same year, at which point the price of 1 ETH was $1.24. The Ethereum development team thought it would be a good idea to foster more decentralization in the network. So they came up with the idea that would make it possible for entrepreneurs and investors to submit  network improvement proposals. Unfortunately, the execution of that idea would lead to one of the biggest shakeups, which eventually led to the division between Ethereum and Ethereum Classic.

Ethereum's developers created a decentralized autonomous organization or DAO on the network as the smart contract-powered solution, encouraging investment and involvement in matters regarding the network. It was created as a decentralized venture capital fund that operates similarly to a modern decentralized governance structure. Stakeholders can use ETH to purchase DAO tokens, which gives them voting rights on the decentralized applications (dApps) supported via the network.

The DAO idea was so successful that it managed up to 12.7 million Ether, worth roughly $150 million at the time.  It made it possible for Ethereum's rapidly growing community to decide which projects to fund without the founders and management exercising too much control over such decisions. This approach attracted a lot of investment and participation from decentralized projects. However, a significant flaw in the DAO contributed to the Ethereum vs. Ethereum Classic narrative.

The DAO Hack: Its role in the split between Ethereum and Ethereum Classic

Although the DAO successfully achieved a sizable amount of funds locked within it, it incentivized malicious actors to seek exploits. In addition, the fact that the code for the DAO was publicly available meant anyone could scrutinize it and explore potential avenues of exploiting the code so they could access the funds locked within the DAO.

Some researchers, namely Vlad Zamfir, Dino Mark, and Emin Gun Sirer, evaluated the code, found numerous issues that could lead to potential exploits and called on the Ethereum team to address them before the DAO could continue operating.

Unfortunately, Ethereum's dev team ignored the warning and proceeded to roll out DAO tokens on exchanges after completing a crowd-sale on May 18, 2016. Three weeks later, someone took advantage of the DAO's vulnerabilities and managed to steal 3.6 million ETH. The stolen ETH was worth $50 million at the time and was roughly a third of the funds locked in the DAO.

The hackers identified a loophole in the DAO's code that made it possible to use the same DAO tokens to refund the network without registering the transaction in the ledger. Unfortunately, the developers who created the DAO's code did not consider the possibility of recurrent withdrawals. However, the hacker did not manage to escape with the funds, thanks to a rule that prevented access to funds for at least 28 days. This allowed the Ethereum team to act quickly to try and diffuse the situation.

The DAO hack hurt Ethereum's credibility while placing a lot of pressure on Vitalik and his team. They had to come up with a solution quickly, and so the team voted on an amendment that would fix the code while restoring the stolen funds through a hard fork. However, the decision also received criticism because it undermined the network's immutability and decentralization. This went against the principle that code is law and caused many to lose faith in the project.

What's the Difference Between Ethereum vs Ethereum Classic?

The Ethereum Classic team also argues that the decision to fork the network broke the ethics of the code. They also claim that the hard fork paved the way for other potential hard forks that will break the rules if the network faces other severe challenges in the future.

Before we get to the network differences, we should first consider their similarities. Ethereum Classic is regarded as the original network, but both networks contain all the records or transactions before the fork. However, the similarities end there.

The present version of Ethereum became more dominant because it was backed by the network's founder, Vitalik Buterin, although he is responsible for both networks since they have the exact origins.

Thanks to Vitalik's backing, Ethereum managed to attract more investors than Ethereum Classic and explains why one network has more developments compared to the other. This is also reflected in the tokenomics of each project.

The main difference between the prices is because plenty of developers have chosen to build on Ethereum instead of Ethereum Classic.  Because of the growing developer community and ecosystem, the demand for ETH continues to grow.  It's also important to note that the difference in their circulating supply is attributed mainly to token burns.

For example, Ethereum 2.0 will handle speeds as high as 100,000 transactions per second (TPS), while Ethereum Classic can handle 14 TPS. The former has yet to be proven as Ethereum 2.0 is still not fully rolled out. But even so, the hash rate of the current version of Ethereum is about 20 times higher than Ethereum Classic's network.

The Ethereum Classic community argues that they have remained faithful to the original network and the core principles of blockchain technology. On the other hand, Ethereum has been more open to radical changes, and this has, in turn, resulted in robust network growth.

Ethereum's current focus is on the shift towards proof-of-stake. Due to Ethereum's popularity, it was able to attract investments  from banking heavyweights such as Citigroup and JP Morgan. Many of the decentralized finance (DeFi) services available today run on the Ethereum blockchain.

Is Ethereum Classic a Good Investment 2021?

Ethereum has gone through substantial changes, mainly aimed at overcoming some of the network's inefficiencies. Meanwhile, Ethereum Classic has undergone significantly fewer changes, which means it might encounter problems similar to those that Ethereum has experienced. Nevertheless, the Ethereum Classic community is aware of the challenges ahead, and as such, network improvement plans should come first.

The Ethereum Classic community recently unveiled an Ethereum Classic improvement proposal called ECIP-1049, which proposes the transition from Proof of work to a consensus algorithm called Keccak-256 (Sha-3). The network will benefit from faster transactions, more efficiency, and better security if the proposal is passed.

The benefits mentioned above of the improved consensus mechanism are essential in preparing for long-term growth. Ethereum Classic has huge ambitions as far as network usage is concerned. For example, it aims to attract layer three and layer four systems to leverage the Ethereum Classic network as the settlement layer. It also intends to encourage central banks to hold ETC in their reserves for real-time and high-value settlements while also encouraging more adoption by businesses. The focus also includes the use of ETC as a long-term store of value, just like Bitcoin.

If Ethereum Classic manages to fulfill its goals, then it will attract more utility for ETC. Fortunately, it looks like the network is focused on making the right improvements as part of its long-term plan. Ethereum partly owes its success to the first-mover advantage, but Ethereum Classic plans to tap into that growth gradually as the crypto market continues to mature.

The cryptocurrency and DeFi world are still in their early stages, which means there is much value to be unlocked. However, Ethereum continues to address some of its biggest challenges, and the network has been tried and tested. So far, it has been the most preferred smart contract network for hosting decentralized apps (dApps).  And because of Ethereum's growing developer community, the ecosystem has led to a rise of decentralized finance (DeFi), non-fungible tokens (NFTs) and an increasing amount of altcoins.

Ethereum Classic has yet to score a significant goal that will put it out of Ethereum's shadow, but it has clear goals, especially those that target more utility for the masses.  Whether you believe in one or both of the projects, you can invest in whichever at main of the major crypto exchanges like Coinbase, Binance and Gemini.  However, it's important to note that if you wanted to stake your ETH tokens to start earning rewards from Ethereum, you can only do so through Eth2.0.